Last week was THE week of eats!! I had two appointments and both involve a good amount of food. I also received a notice saying there will be water disruption around my area. I cringed at the thought of having to re-schedule or miss out those appointments so I decided to just go with it, with or without water…of course I went out and bought buckets to backup my supply in case it should happen. But thankfully, there wasn’t any shortage.

The first was a dinner I hosted for two gals I haven’t met in a long time. We used to work together and I’m glad that we all love to hang out and enjoy just two things mostly, karaoke and food. So, although we’re living in the same city, it’s been so hard to just meet up and chat. I can’t tell you how many raincheques have piled up in the past. 🙂 I planned the menu to a path that I could pre-prep the day before and just use the oven to do the cooking instead of the gas hob. 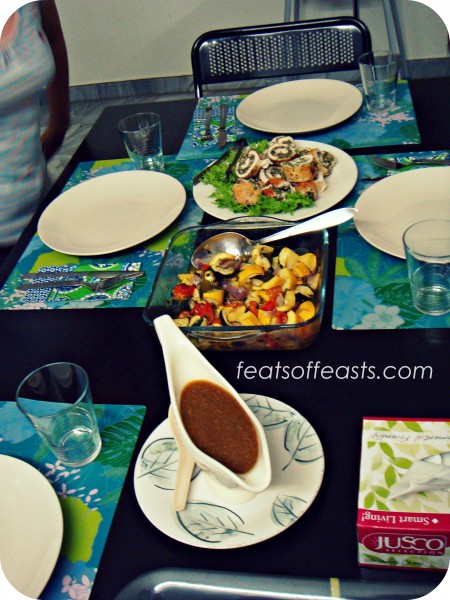 This is the third time I’ve made chicken roulade (below). The first was Christmas in 2009 and then it was CNY the year after that and then now. Each time I tried different fillings but I think this one really cuts it. I’ve also improved my technique in prepping the chicken (well, I’d like to think I’ve improved although technically, there’s no one here to grade me). I remember TRYING to make this at my mother’s house and she didn’t have a lot of stuff like the pounder or even cling film. I had to use a rolling pin to smack the chicken flat but I disliked the process because if you don’t use cling film, you’ll just get the ‘holy’ chicken liquid all over yourself. 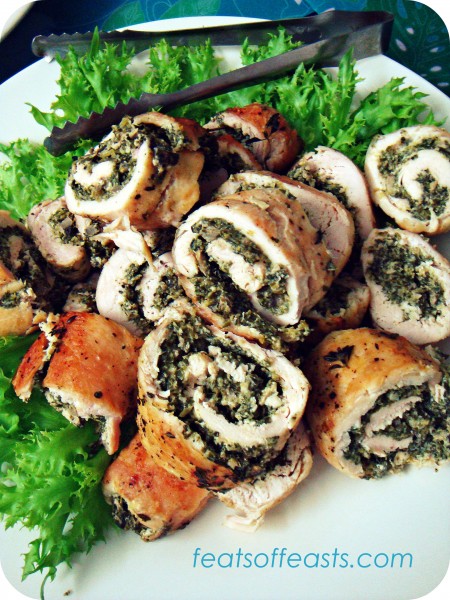 To accompany the mains was a dish of roast vegetables (below). To be more accurate, it’s more like half roast and half steam because courgettes and tomatoes will let out their natural juices during the roasting process. Don’t throw this away, it’s full of flavour. I just use it to baste the vegetables occasionally while they’re roasting. 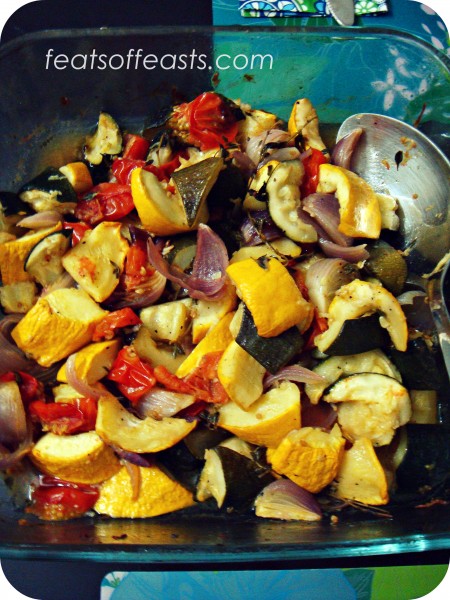 I also made some gravy (below) for hubby’s sake but everyone loved it too, it was the first dish to finish. 🙂 I will admit though and unapologetically, I used half the instant gravy powder thing and half fresh-from-scratch. The thing is, chicken breasts would have very little fat or flavour and I thought it might not be enough to make at least a cup and a half of gravy (there were four of us eating). Also, adding the instant stuff means you don’t have to mess with flour to thicken the consistency but I did use homemade stock to de-glaze the pan. 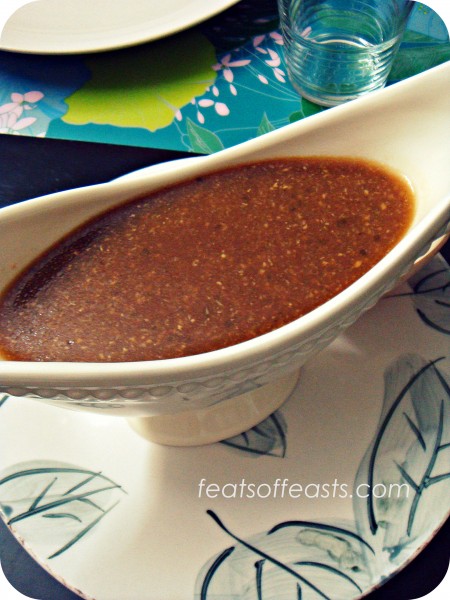 I forgot to take a photo of what we drank but it was just a simple mixture of Ribena cordial and fresh lime, that was a hit too. It just lifted up my friend’s spirit because I assumed she had a long day at the office and there was a massive jam when they were making their way to my house. She also so generously bought dessert. It’s called an Easter Cake (below); it looks and taste somewhat similar to a fruit cake and there’s liquor in it. You really can’t eat a lot of this cake, a small piece with some ice cream would suffice because it’s so dense and rich. 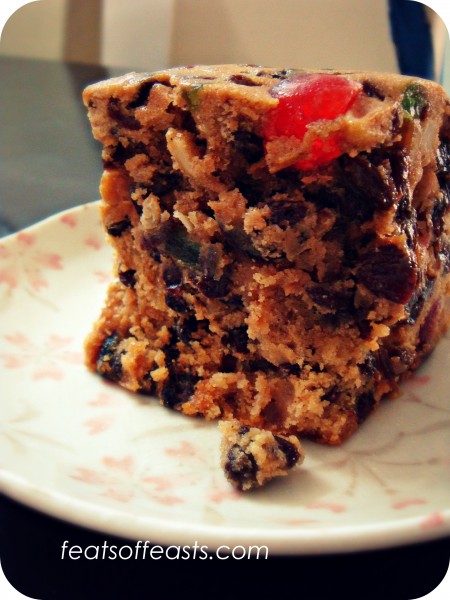 Most of the photos below were taken during the late night so I apologise for the lighting and blurriness. These are days when I wish I have those long tripods and a remote to just click away when I need to.

1. To make stuffing; boil the frozen spinach in a pot of hot water, drain them and squeeze out excess water. Let it cool.
2. Let your cream cheese come to room temp. When it’s ready mix the spinach and chopped mushrooms with the cream cheese thoroughly and add like a handful of grated Parmesan. Season with black pepper. 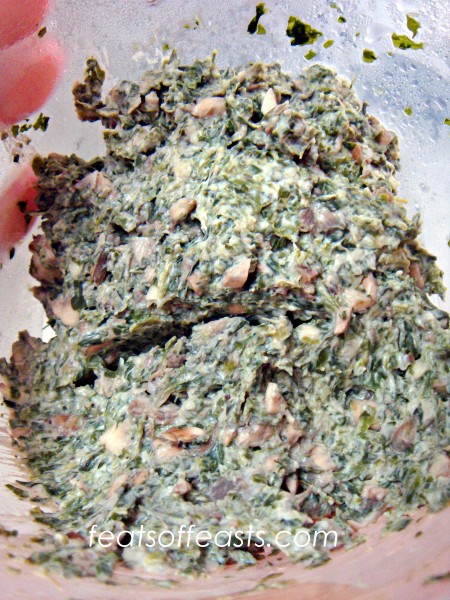 3. Slice your chicken breasts in the centre and open it up flat. Lay a layer of cling film over the chicken and pound it flat till you have half a cm, give or take. I used the ridged surface of the pounder for this although the chicken hardly needs tenderising but it worked more effectively to get a flat surface.
4. Spread the stuffing on top of the flat chicken but not all the way to the edges.
5. Take the edge closest to you and start rolling all the way till you have a tube.
6. Use cooking twine to secure it together.
7. Take a piece of cling film and roll the stuffed chicken with it. Twist the sides tightly as you would when you make sausages and tuck it underneath. Repeat process 3 to 7 with the other two chicken breasts.
8. Let it sit in the fridge overnight. 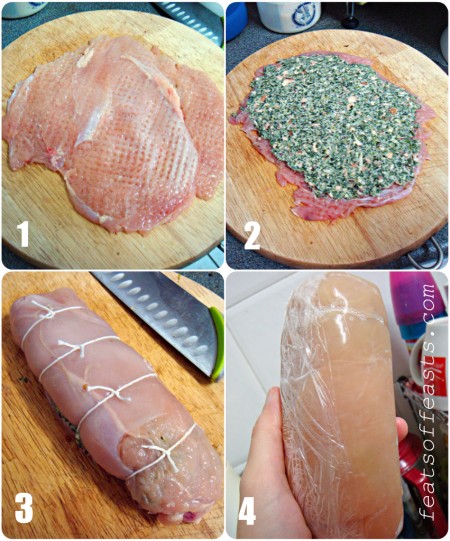 9. Pre-heat your oven to 200C. Take your chicken out of its cling film and season the surface with salt and black pepper. In a pan with some olive oil, brown your chicken tubes on all sides.
10. Before putting it in the oven, add your garlic cloves and onion wedges is the pan and also scatter fresh thyme on top.
11. Cover with a foil on top and place it in the oven. Reduce the heat to 170C and roast for 30 mins.
12. After 30 mins, take out the foil and turn on the top grill (if you have such function) and crisp the tops of the chicken, 15 mins or so. 13. Let the meat rest for at least 20 mins. Cut off and discard the twine. Use a sharp knife to cut it into medallions.
14. Eat while it’s still warm.

1. When you’ve finished roasting the chicken and taken it out of the pan to rest, you’ll leave behind some drippings with the now soft garlic cloves and onion.
2. Take a fork and mash the garlic and onion to form a paste. Discard the drippings until you have about 1 tablespoon left.
3. Turn on the heat of the gas hob and pour in about 2 cups of stock. Stir it around to get all the brown bits.
4. As it comes to a boil, add the instant gravy powder and stir it around. 5. Taste and adjust seasoning. If it’s too salty, add more stock. Let it reduce to desired texture under low heat.
6. Pour everything through a sieve. Mash the garlic and onions through the sieve and mix the paste into the gravy. This really adds flavour.

1. For the courgettes, slice right down the middle and cut away the spongy middle. Then just slice diagonally with the skin on.
2. Place all your vegetables in a roasting dish. Don’t these colours just make you happy? 🙂 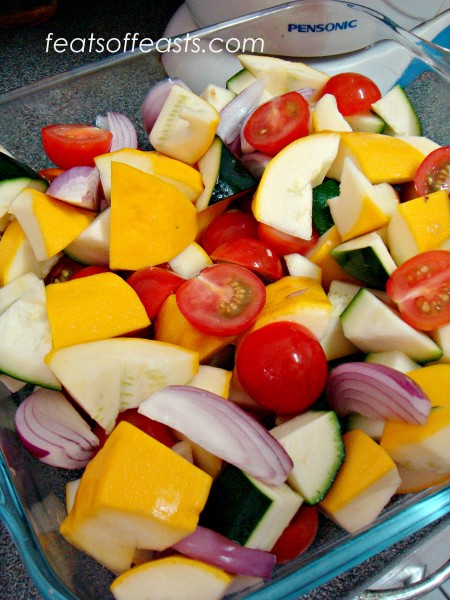 3. Pour about 3 tablespoons of olive oil in a small bowl, grate the garlic into the oil and mix with a fork. Pour it over the vegetables. Season with salt and pepper and fresh thyme.
4. Toss everything with your hands and roast in a pre-heated 180C oven for 45 mins to an hour, basting occasionally with it’s own juices. **Note; Roast the vegetables first before the chicken if your oven doesn’t have space to fit both. Cover the vegetables with foil if dinner has yet to start. 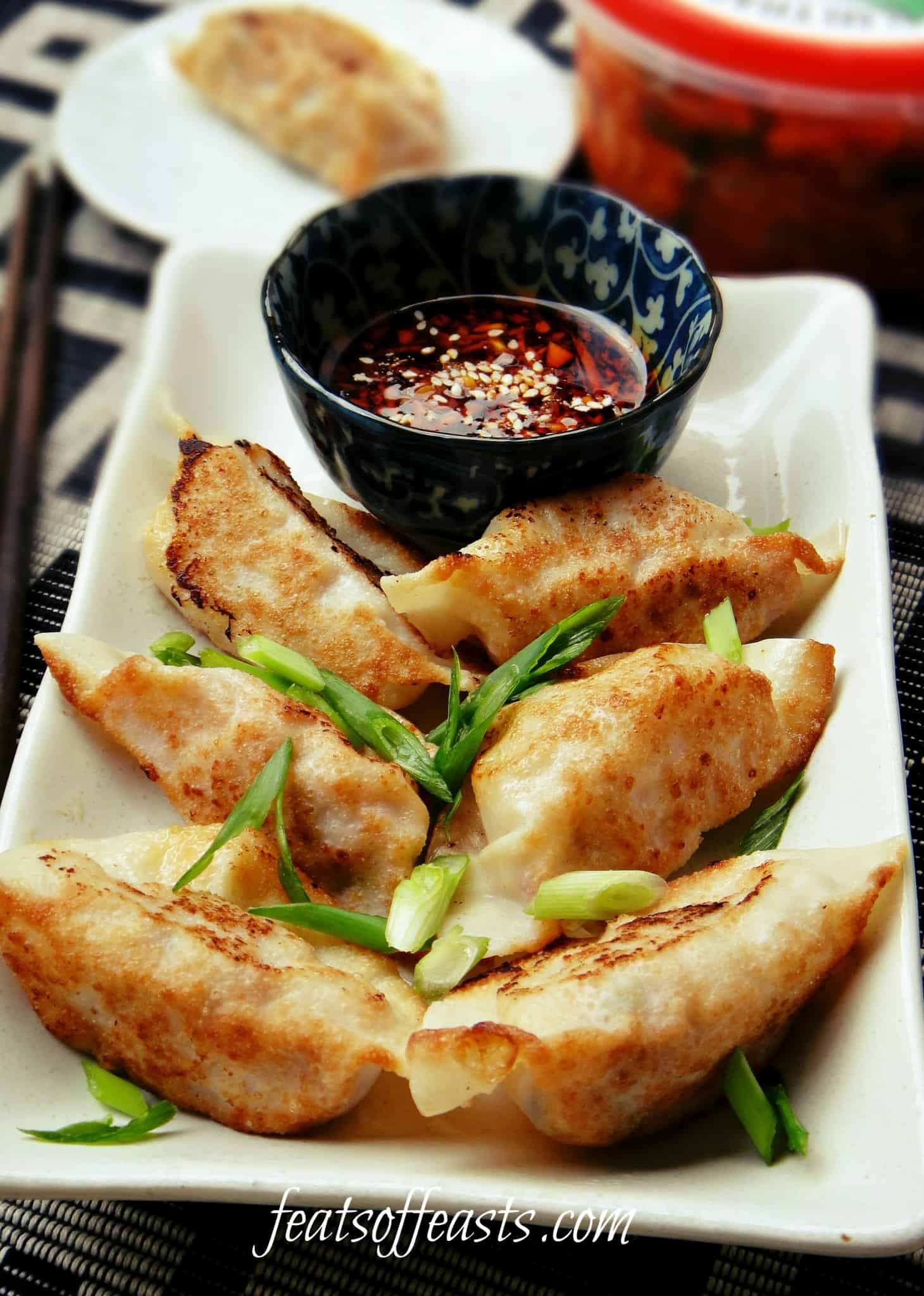