I attended a bloggers CNY pot luck 2 weekends ago and I’m probably the last one to post about this. Haha! I had to do theme week first and then get to this post. We had the gathering at Sonia’s house. She had been more than generous to play hostess to the event and I was more than excited meeting these other bloggers for the first time. They were;

I didn’t take any photos while I was there for few pathetic reasons; first, my digital camera lens has jammed. There is something wrong with the rotating part that wouldn’t go all the way back in when you switch it off. The camera still takes decent close-ups (after taking 30 shots or so) but somehow I feel the focus has been a bit out lately. Second, since this was my first bloggers gathering, I wasn’t sure how it works, like are we allowed to post about it or is it more like ‘whatever was said and shared in the pot luck, stays in the pot luck’ kinda thing. Overthinking, I know but since I said I was the last one to post about this, obviously it’s just me and what’s inside my head. Third, I couldn’t borrow another camera on time because we had just got back from Kuching and was still settling back to normal mode. Also, my phone is nothing similar to the ones with ‘i-‘ in its name and its camera features. I am currently using a phone, with a battery life that can last up to four days. That will tell you roughly how rock-age it is.

That being said, whatever pictures you see here of the pot luck post has been sourced from my other blogger friends’ posts. I will credit it back to them under the caption link. 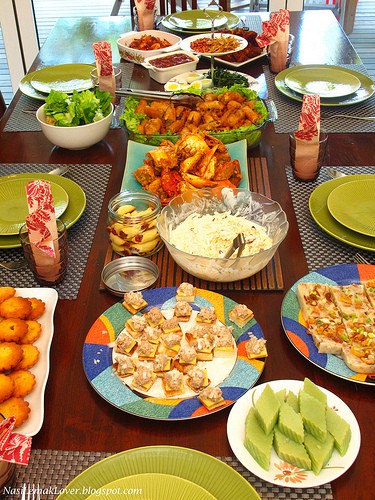 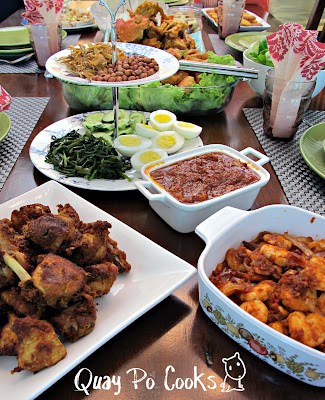 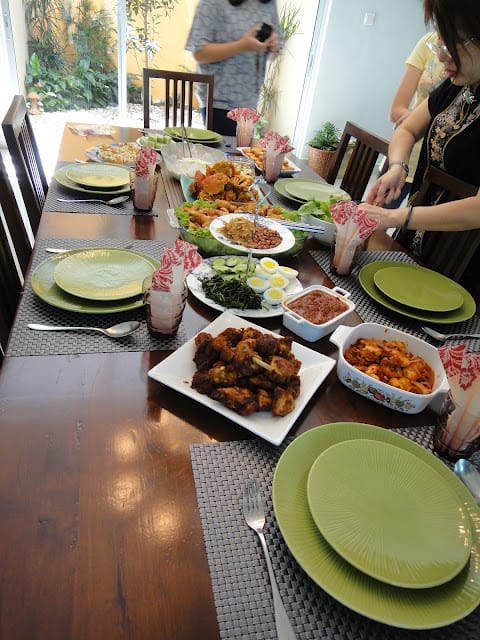 Picture from Table for Two or more, look at the setting of the table,
so pretty and classy, down to the napkins! 🙂

Picture from The Sweet Spot 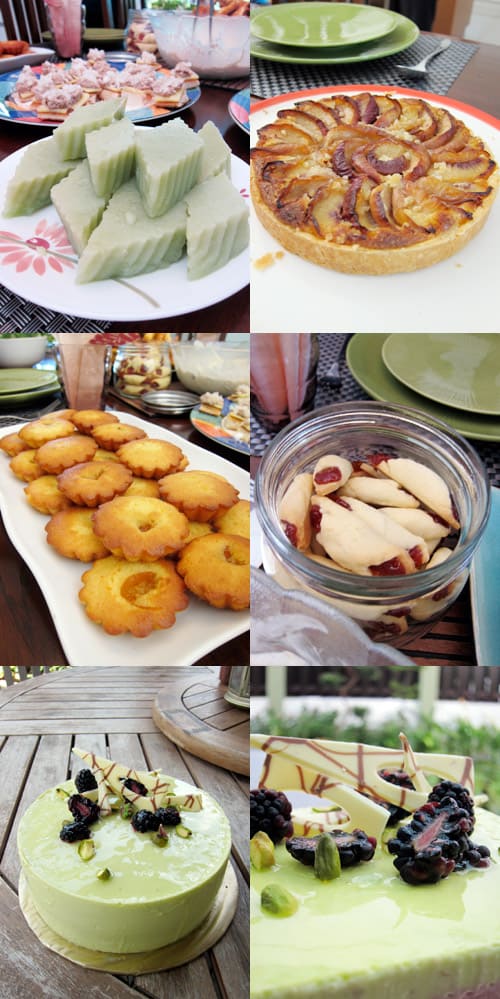 Picture from The Sweet Spot 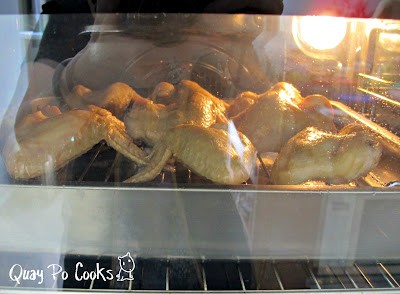 Picture from Quay Po Cooks, chicken wings from Reese of ReeseKitchen,
who wasn’t able to attend but still so generously contributed her dish. 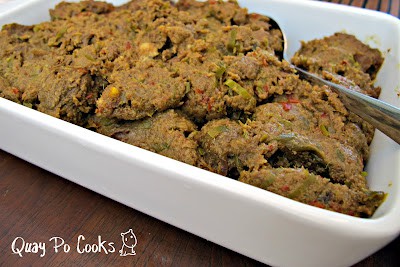 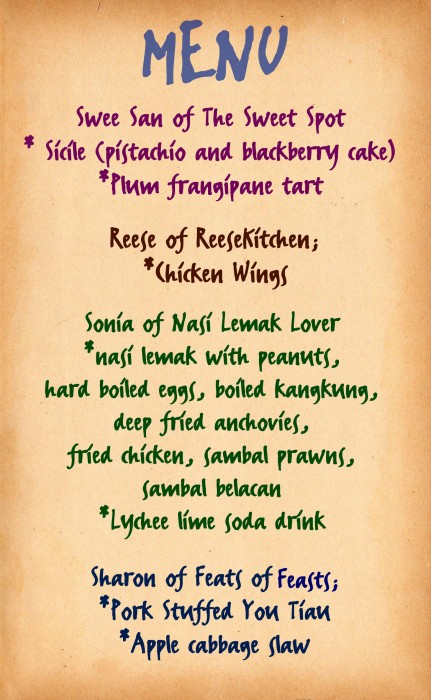 I’ll say, having to meet these ladies was a real TREAT. And what’s more a treat was having the opportunity to sample their culinary creations. I am truly inspired and humbled by you ladies, not just for your abilities and skills to come up with new recipes after the other but by how you apply excellence to every other aspects of your life, whether it’s with family, your kids, your home, your blog or your jobs. I think I brought something home with me that day and it wasn’t just a satisfied gut! 🙂

If that wasn’t good enough, Lena, Sonia and Veronica gave me something to bring back home; *Kitchen mitten and bowl from Lena, thank you so much!! I love it!
I wanted to model it like Veronica but I had no extra camera man…
*2 packets of Bak Kut Teh herbs from Sonia Mixed nuts with pretzels if I’m right….from Veronica,
I know I should have had a better shot but this
mixed nuts was gone after two days before I could get
a shot of it full in the jar, this is what’s left….
goes to show, it was REALLY good!

And now for something extra, I am going to share with you the recipe for the dish I made for the pot luck. This was originally created by my mother, I don’t care what other people say but I honestly believe she pioneered this stuffed you tiau thing. I have heard of a shop in Puchong doing this thing too but from what I heard, it has closed down since. 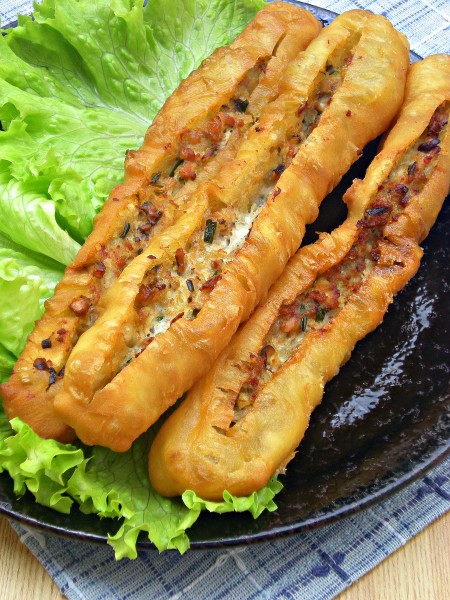 She’d make this for all the special occasions and it is quite a good dish to have when you need to feed a lot of people. The prep work might be a bit finicky but it’s not as hard as one might think.

This is what you tiau looks like on its own plain self (below). They are usually sold with two pieces joined together in the middle. When I made this stuffed version, I actually split the two apart. Which is why I said portion-wise, you’re getting quite a lot. I don’t know the English name for this, sometimes it’s called ‘oily sticks’ or ‘Chinese Fried Donuts’. We usually eat this for breakfast with porridge or as you can see from the picture, a soy-like dish and it also goes very well with Bak Kut Teh. Sonia, I was so psyched when you gave me the bak kut teh herbs blend, it so happens I have you tiau with me!! 🙂 But unfortunately I didn’t have the chance to go buy some pork and now the you tiaus are all polished off already, but no matter, I can always purchase them again. 🙂 Now this is important; when you first purchase the you tiaus from the vendor, (I got mine from the morning wet market) make sure to ask for ‘white’ or Cantonese say ‘tsa pak’ (fried white), that means don’t fry all the way till it’s crisp and hard. The you tiau needs to be poofed up but still soft and bendy. When I served the you tiaus at the pot luck, I cut it into four pieces for each strand (below); 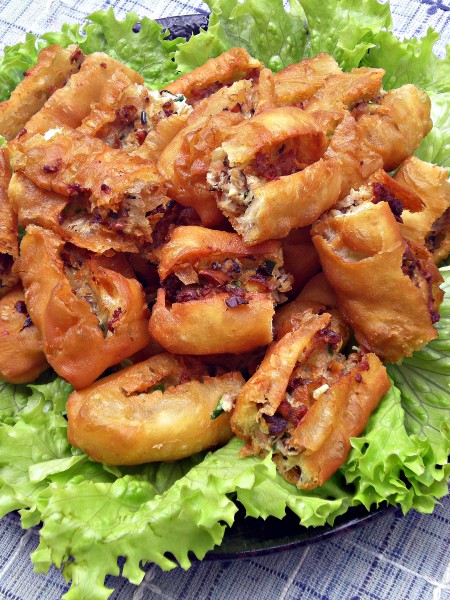 You tiau (as many as you like, remember to tell the vendor to cook it ‘white’/tsa pak)
Oil for deep frying

Stuffing;
Chinese meatball mix (you can alter it to your preference by adding chilli or ginger or garlic chives, I’d go easy on the breadcrumbs too, you don’t need it to be too dry)

1. Separate the you tiaus down the middle. Using kitchen scissors, cut a slit in the middle where you separated the you tiaus. Don’t cut all the way to the end, you should leave at least 2 – 3cm on each side.
2. Using your hands, spread the stuffing inside all the way from top to bottom. Do not put so much stuffing that you can’t squeeze it shut, too much and the meat might not fry all the way through, too little and you might not taste anything.
3. Do up all the batch of you tiaus and put them aside while you heat the oil in a deep wok for frying. You might need quite a lot of oil.
4. When the oil is of frying temp, drop in the you tiaus meat side down first. Fry for couple of minutes and then turn them over to fry the other side. They are ready when the you tiaus are crisp and the meat cooked through.
5. You can serve them as a whole strand, but I like to cut them into bite-size pieces. Eat plain, with Japanese mayo or garlic chilli sauce.
6. If you have leftovers, just warm them through in a frying pan under slow heat or use the oven.