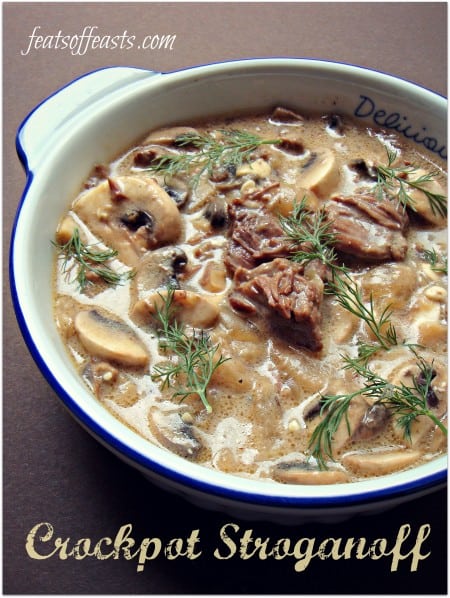 I was wondering whether I should be using the name Crockpot or slow-cooker (they mean the same) because crockpot has become a registered product name but since I sourced for this recipe, I’ll just stick to its original name. I own a very old, vintage but very reliable and still functioning crockpot. Even the colours itself look like it’s straight out from a recipe book in the 70’s. But I still love it and I do love all things vintage when it comes to kitchen stuffs. 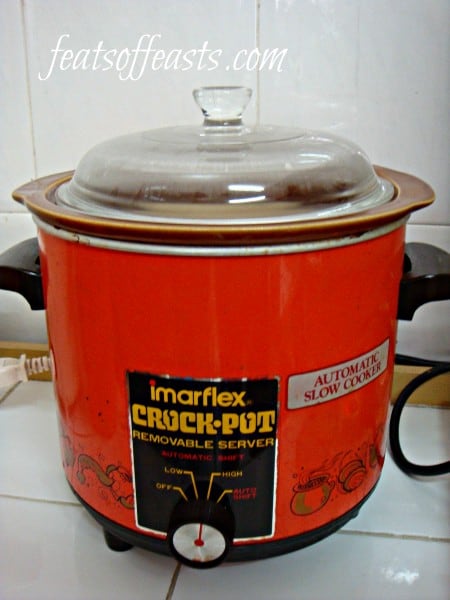 I don’t know how I came to own this crockpot….I think it was left behind by the previous tenants of my house. But it is a good-sized crockpot, about 2.5 litres in capacity. The thing with Asians and crockpots is that we tend to use it limitedly, mainly cooking soups and porridge/congee (not that there’s anything wrong with that) but slow-cooker recipes have evolved tremendously. I once had a lamb dish (and this is not lamb stew or any of the gravy sort of dish) cooked by a friend using the crockpot. She said it was really the easiest way to get it all tender and juicy without fussing over it.

But ever since being a SAHM, I’ve reduced the crockpot usage. No reason really, just thought that since I’m at home, I could keep an eye on the whatever’s on the stove. So when this recipe came up, I was excited to remove my trustee crockpot from its cobweb-laden corner and put it to work again. I also wanted to see how good this stroganoff was, cooked from a crockpot. I made stroganoff before with a normal frying pan but wasn’t too happy with the outcome, I think there’s a flaw in the recipe too (or just a flaw in my cooking technique). Because it was supposedly ready in 20 mins, how is that enough time for the beef to get tender? 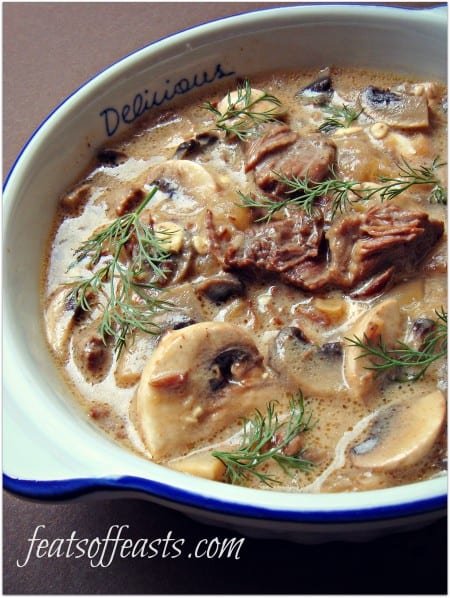 Anyways, back to the stroganoff…I came across this recipe again from Pinterest but I will state the source in the recipe below. When the dish was done I was really happy at how tasty it was and that the beef was super-juicy, tender. I made some changes to the original recipe and also I must state that each crockpot works differently. The original recipe cooked this for 8 hours on slow/low. I wasn’t sure how slow, my low setting would be because I started in the afternoon and wanted it ready on time for dinner. So I made adjustments to the cooking time. 5 hours on high and and two hours on slow/low, just to add some last minute ingredients. 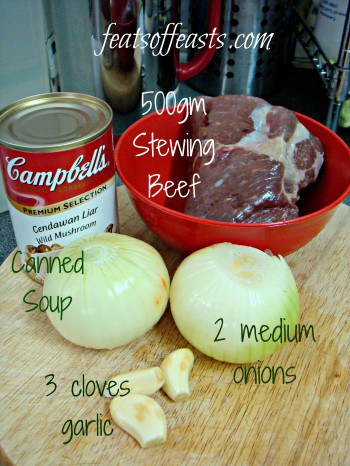 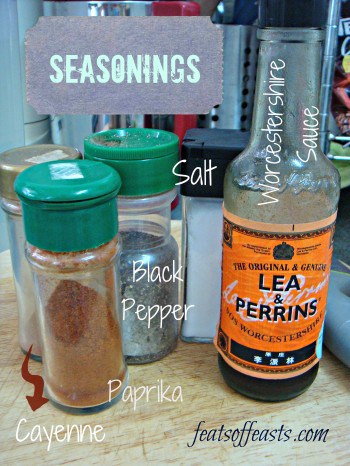 1. Cut the beef into cubes and pat them dry with paper towels. Heat olive oil in pan and brown beef cubes on all sides. I still do this even though I’m using the crockpot because I think browning them gives awesome flavour. 2. Dish out the browned beef and set it aside. In the same pan and oil, cook your onions and chopped garlic. Do not cook them until they’re soft, just de-glaze the pan till all the brown bits are coated in the onions. 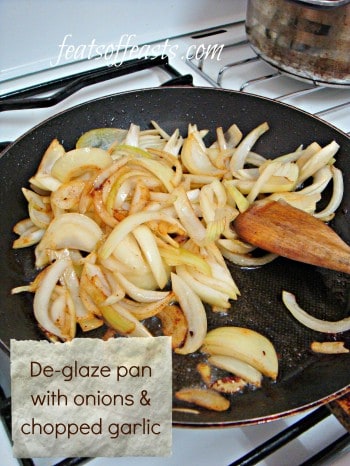 3. Open and pour the two cans of soup into the crockpot. Pour some warm water into the can and add it to the soup. Stir till you have a rather thick cream consistency. Pour in the cream. It is cream of mushroom after all. 4. When that’s done, mix everything in. The browned beef, the onions and garlic to the soup-gravy. DO STEPS 1 TO 4 BEFORE INTENDED COOKING TIME ON THE CROCKPOT. 5. Season with Worcestershire sauce, paprika, cayenne, black pepper and salt. Don’t add too much salt at this point because you have other things that are salty. Adjust the seasoning at the end if you feel the need to.
6. Give everything a final stir and cook it on ‘high’ for 5 hours, stirring every 2 hours. Check after 5 hours the tenderness of the beef. It should fall apart easily. Switch it to ‘slow/low’.
7. 1 hour before serving, break up the cream cheese to cubes and stir it into the gravy. You might have to break it up further in the sauce.
8. Half hour before serving, add the sliced mushrooms. Basically, my self-planned timing was; 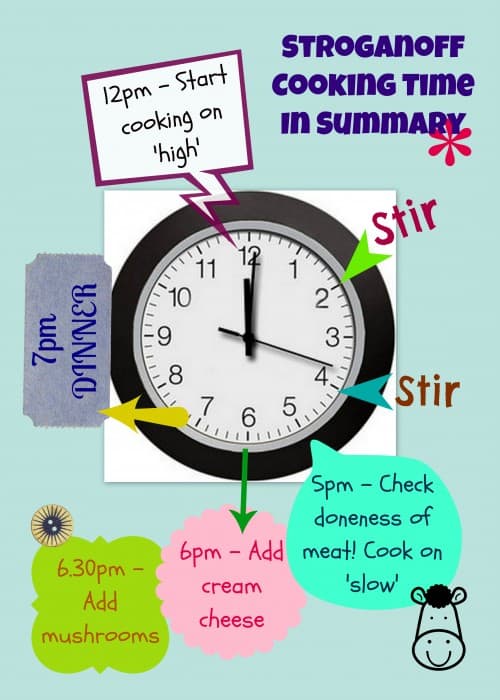 9. Serve over rice or commonly; pasta fettucine or pappardelle. Garnish with dill (optional). 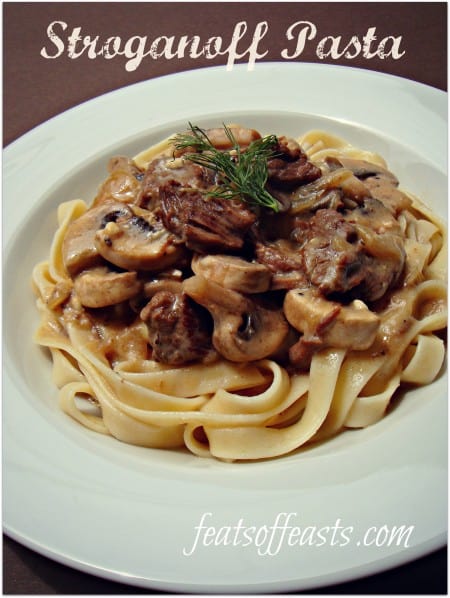 **Side note; I was contemplating on whether to point out this ‘flaw’ but I think I want to solve my conundrum at the risk of it. Although the stroganoff tasted excellent with the cream cheese, there was this peeve of mine where the cream cheese didn’t completely melt through. There were still blobs of it here and there in the gravy. Although it didn’t affect the taste, it was not so presentable visually. Is this because I used a different brand of cream cheese? Or does only Kraft Philadelphia cream cheese in the original recipe works and would melt like butter into the gravy? Do any of you have such similar experience? Would appreciate some feedback and possibly some solutions.

Also if you want more crockpot recipes, check out this lady, Stephanie O’Dea, who cooked with her crockpot for a whole year and didn’t repeat a recipe. I’m gonna try some myself soon!