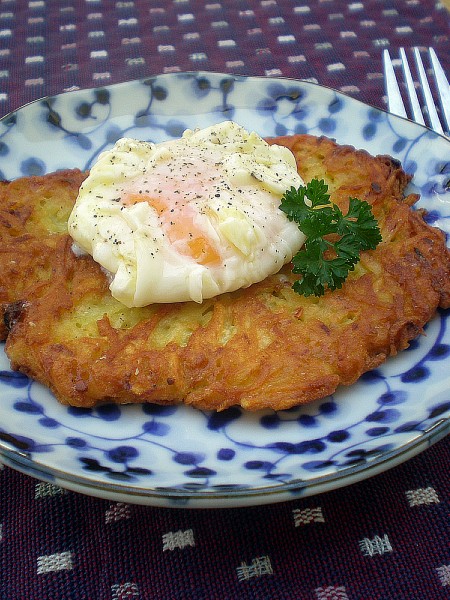 This method of cooking potatoes has so many names, latkes, rosti, cakes, fritters, pancakes…so I’m not sure if there is a jarring difference in all of them, just different names from different places. I saw these potato latkes from Once Upon a Chef and since I love potatoes, this was just the thing for like a brunch meal. In the original recipe, the chef oven-fried the potatoes, sure it might be healthier but you still have to pour a considerable amount of grease on the tray. And once one side is done, you have to flip it over. I have a phobia of handling hot grease coming out of the oven, especially when it’s screaming hot and you have to take time to flip the latkes over on their other side. I pan-fried mine and they worked just as well, though I must say mine tasted more ‘pancake-y’ than ‘latkes-y’. 😀

To go with my latkes, I made a poached egg. Now, poached egg takes many practises to get it right and I don’t have enough experience to even call myself skilled. I saw a clip from Jamie’s Great Britain on a cheat’s version of poaching egg and thought I’d tried that out. You use cling film, put the cling in a cup and break the egg into the cup. After tying it into a knot, just drop it into some simmering water for four mins and there you have mess-free poached egg (below). It’s not perfect because you get that lines from the knot on the whites, but I think it works a treat because you didn’t waste any of the whites and the yolk can achieve that oozy consistency. 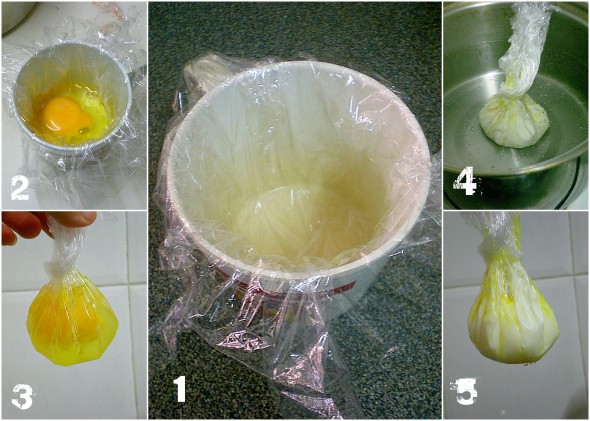 In the clip (below), Jamie uses more stuff in his poached egg like herbs, oil and salt. I just poured a little oil to make sure the egg won’t stick to the film and it works for me.

With poached egg, there’s always that ceremonial break……oooooooze……and *sigh of relief* (below). It’s important to know that potatoes need seasoning, like mashed potatoes…if you don’t season it well, it will taste like…well, NOTHING. Just bland. That applies here too. You need to season the latkes mix well or if not, it’s gonna taste as flat as cardboard. 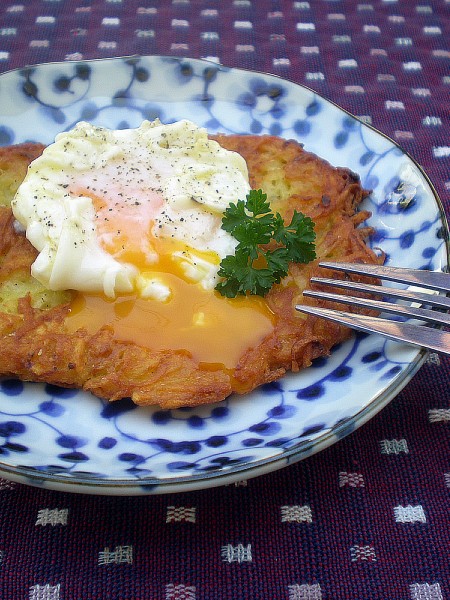 1. Peel the potatoes and onions, then coarsely grate them with the onion together in food processor or by hand using a box grater. Place potato mixture in a fine sieve and press down firmly with paper towel to remove excess moisture.
2. Stir and repeat a few times with fresh paper towels until liquid is mostly drained. Transfer potato mixture to bowl and mix in eggs, salt, baking powder, flour, black pepper and parsley.
3. Heat oil in frying pan till it’s hot enough and drop in the potato-onion mix with a ladle. Then press it down to make it flat. Fry one side till it’s crisp and then flip it over to fry the other side. Do this in batches.
4. Serve and eat with a poached egg on top. It’s best eaten warm. 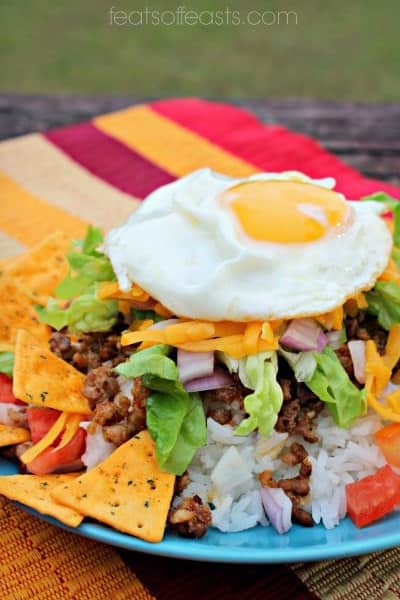 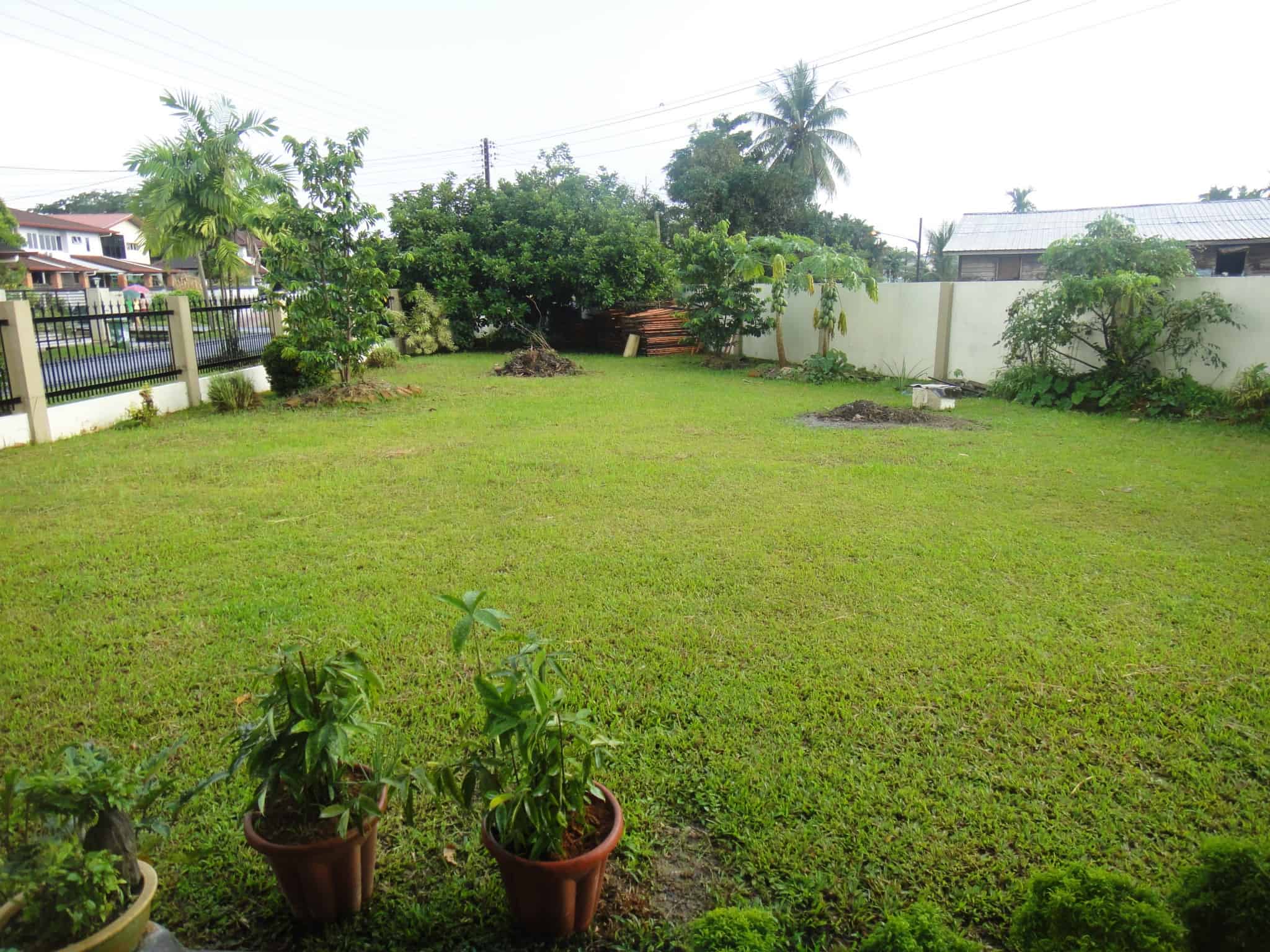 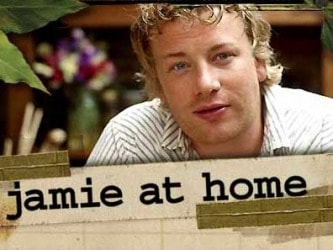 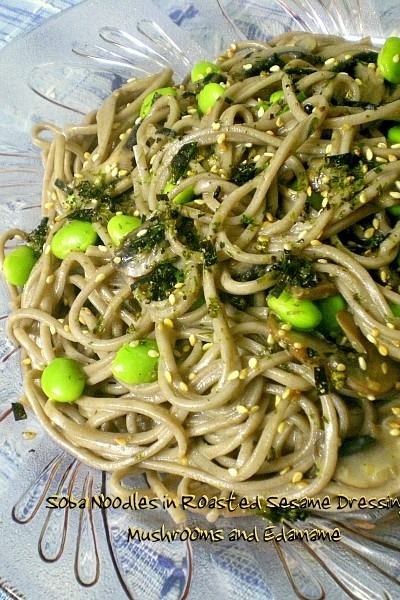