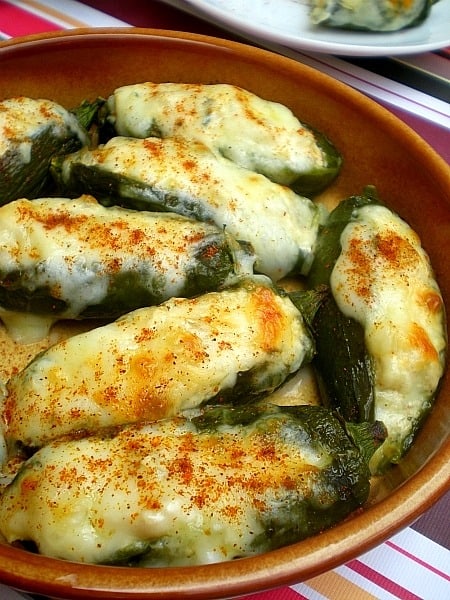 I managed to come across some great jalapenos lately. And RM2.50 for a box of 12. Quite a steal. I never ate jalapenos in the whole before and was excited to see if I could down them. I keep hearing of jalapeno poppers and there has been many versions to this recipe. I did a Hawaiian Chicken stuffing, similar to a Hawaiian Chicken Pizza. I must admit I got a bit too cocky thinking my heat tolerance would be able to handle these gems. I had to find out the hard way how dead wrong I was. After the second jalapeno, it was Mount Vesuvius on a scale off the roof! 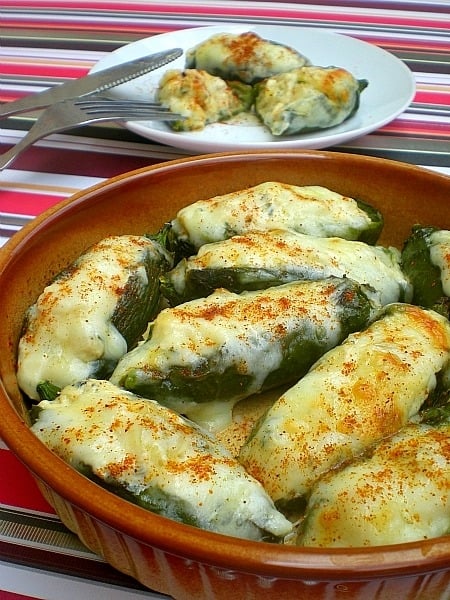 To ensure that it wasn’t too hot, I actually roasted these little, green baubles, skinned them and then de-seeded them. I thought like bell peppers, they might take on a sweeter flavour rather than the hot stuff after roasting. The first one went down quite easily and I must say…it was really delicious. But the heat started to creep in like a delayed effect. Before it could fully blow, I ate a second one and that did it in. I was tearing, wheezing and coughing. When you’ve had something really hot, it’s best not to drink water, go for milk or some dairy based drink like yoghurt or lassi. Needless to say, I wasn’t sure I should eat anymore, for fear it might sear right through my stomach lining. 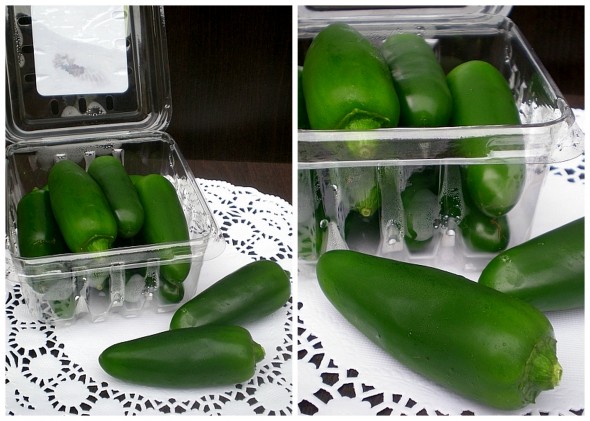 If you can handle the heat, do give this a go. They are quite a spicy treat!

I had my husband finish the rest but I gave him a warning on how hot it was. He fancied himself quite good at handling chillies ever since he ate some habanero chicken wings. But for safety measures, he ate the poppers with bread. After 3 bites into his ‘sandwich’ his tongue started to wag. It was that hot that it gave him goosebumps and made him sweat behind the neck. 🙂 But he commented that it was really delicious all the same. That kinda made me think whether those chicken wings were cooked with REAL habaneros or some distant, milder cousin of the acclaimed pepper.

1. Put the jalapenos on a tray and roast them in the oven till they’re quite charred. Put them in a bowl and cover with a plate on top to let them steam. When they’re cool or soft enough to handle, skin the peppers and use scissors to make a slit in the middle but not all the way.
2. Remove the seeds and the membrane. Be gentle with it so you don’t tear the whole jalapeno. Retain its shape as much as possible. 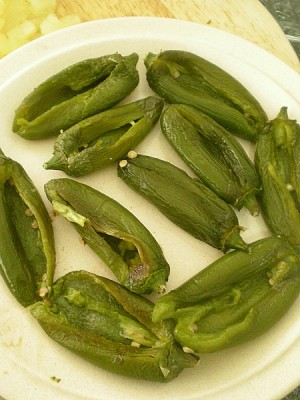 3. Heat a frying pan with oil, sautee the onions and garlic till they’re fragrant. Add the mince chicken and break it up in the pan while browning it all over.
4. Add cubed pineapples and season with salt, pepper, Italian seasoning and cayenne. Taste and adjust. Let the mixture cool to room temp.
5. Take about 1/4 cup cream cheese. It must be soft and at room temp. Add about 4 heaping tablespoons of the chicken and mix it with the cream cheese. If you fancy more, just pile it on.
6. Place the mixture in a piping bag. Snip off a big hole at the end so it can go through easily. Pipe your stuffing into the jalapenos, shaping them nicely once you’re done. 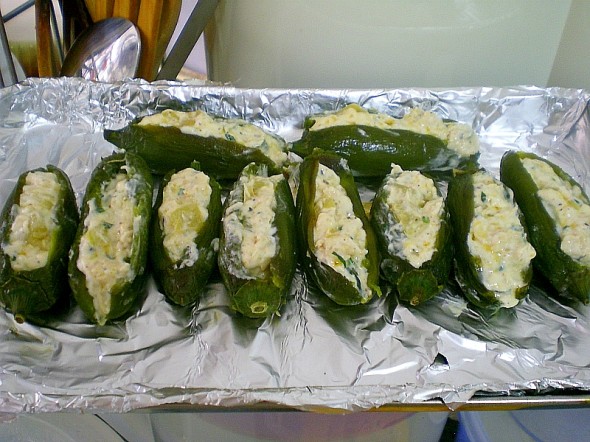 7. Once you’ve done all the jalapenos, top with shredded mozarella cheese and bake in the oven till the cheese has somewhat melted and browned.
8. Garnish with a bit of paprika on top and eat while it’s warm. Do have a glass of milk nearby in case it gets too hot to handle.

You will definitley have some of the cooked minced chicken as leftovers but no worries, I used up all the meat to make Hawaiian Chicken Okonomiyaki (below) and they are scrumptious!! So, no wastage there. 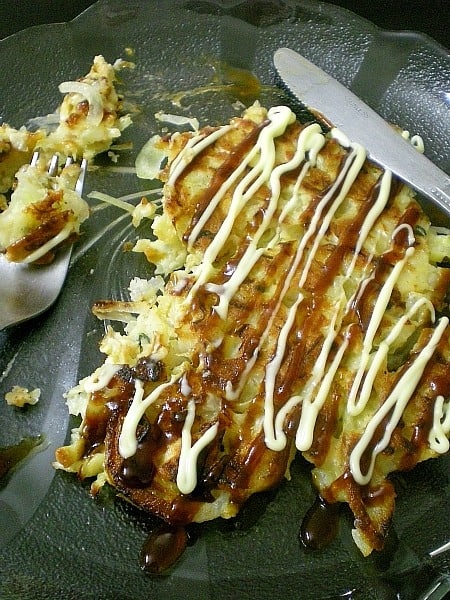 For Okonomiyaki recipe, click here, just replace the meat with the Hawaiian Chicken 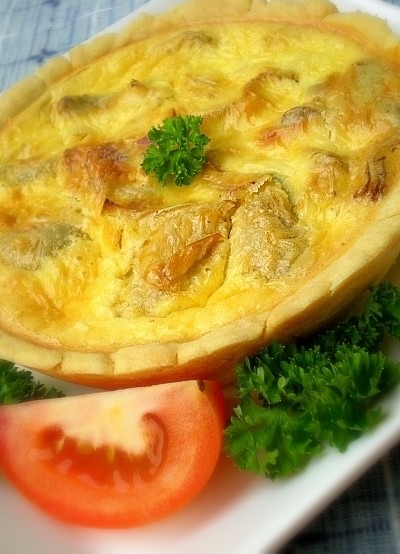 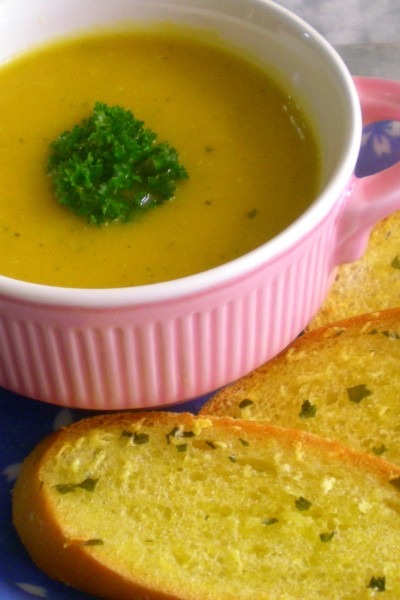 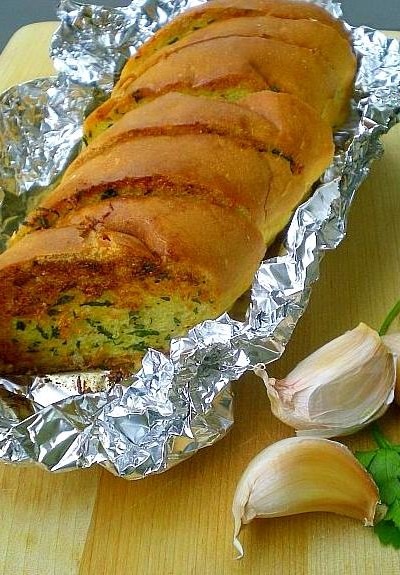