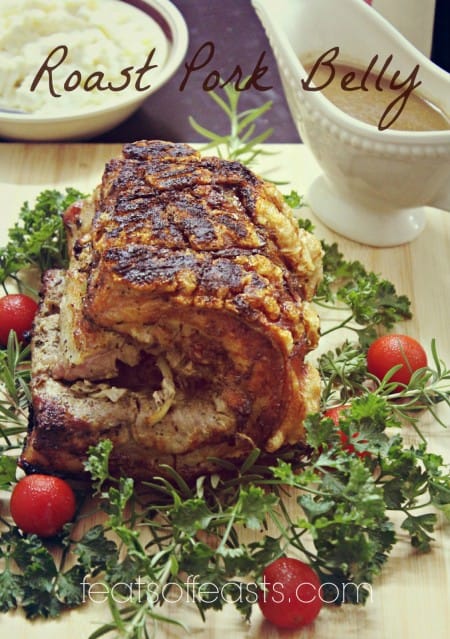 Christmas of 2012 was really depressing for me…I just had my second child and was sort of high in this emotional roller coaster and while everyone was having a good time and getting in the celebratory mood…I was stuck at home tending to my girl and having to put up with a rather clueless confinement lady. Things were a lot worse when I keep seeing friends post their delicious Christmas spread on Facebook. Although confinement food is not the worse thing in the world, it is rather tiring when you have a cook with little or no imagination vested in the cooking. After the first week, I had to coach her instead on how to prepare certain dishes. Just to paint a little incident, before my CL came, I had 6 leftover tomatoes, I told her to use it when she cooks, that means spread it out in different dishes. She went ahead and cooked all six tomatoes producing a huge bowl of tomato puree-mush with some beaten egg. Hubster said it was horrible. She took things literally and just whacked out a ‘tomato’ dish. Giving her the benefit of doubt, maybe she didn’t know what I meant but she didn’t bother to confirm either for fear of appearing incompetent.

Well, enough of my rants….you can see why I had to go all out in 2013. Probably to make up for that depressing Christmas of 2012. I want to do something I’ve never done before and make it extra special and indulgent because it’s Christmas after all. So, pork it is!!! And a delicious roast pork with homemade dinner rolls. I must tell you, my dinner rolls were the first successful yeasted bread I’ve ever made and it was done just in time before the year ended because one of my resolution for 2013 was to make a successful yeasted bread. Haha, I did it!!! I got over my fear and Christmas was not ruined. Hubster said it was awesome rolls which reemphasize my high of success. 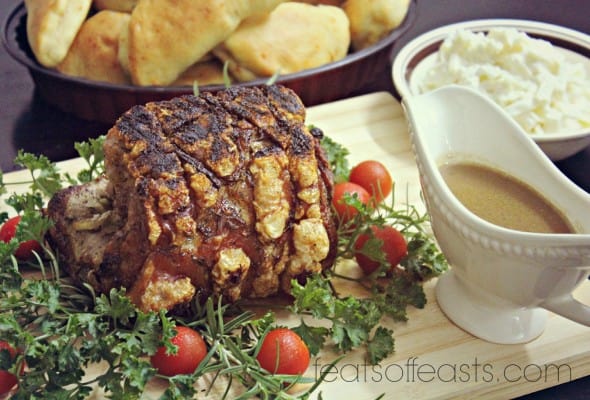 So I placed an order for free range pork belly. When I got it, the butcher packaged it nicely in a styrofoam plate and from the outside it looked rather thick. I thought it was a thick square piece of pork and I could just roast laid flat. Well, I didn’t open it and it was left in the freezer till Christmas came closer. When it was thawed, I saw that it was actually a long rectangular piece. Hmm, if I were to roast it laid flat, the meat might not be substantial, so change of plans, roll it up and secure with twine instead. 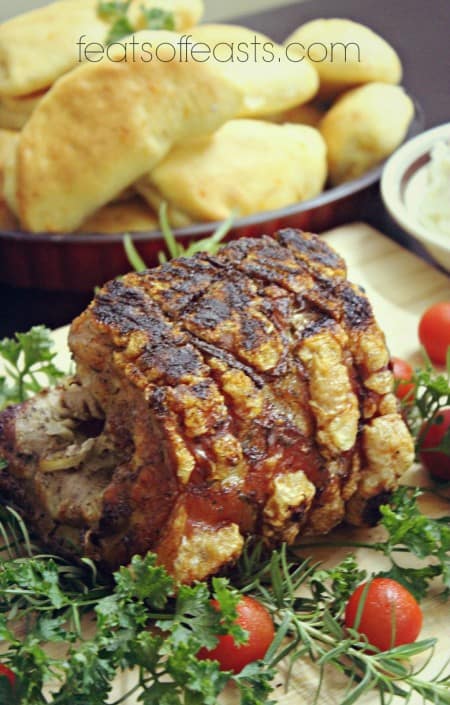 Now I did some extensive research before proceeding with the cooking. But I didn’t make it too complicated for myself. It’s all about letting the oven do the work. After deciding what sort of rub to use, it just takes time rather than prep. You do have to dry out the pork skin thoroughly if you want a good crackling. I will admit that this outcome of mine was not to my full satisfaction but I think I know where to rectify to make it perfect the next time. 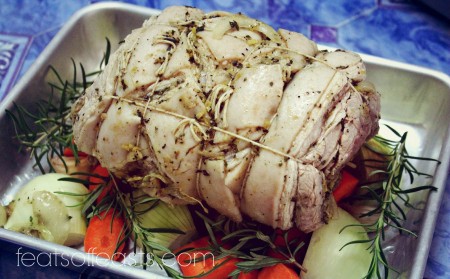 Before going into the oven….

I decided to serve the pork like ‘mantou’ style, or pulled pork in buns. For that crunch factor, a simple apple-cabbage slaw. And if the preference is not for the sandwich style, there’s gravy to have it eaten like a piece of ham. 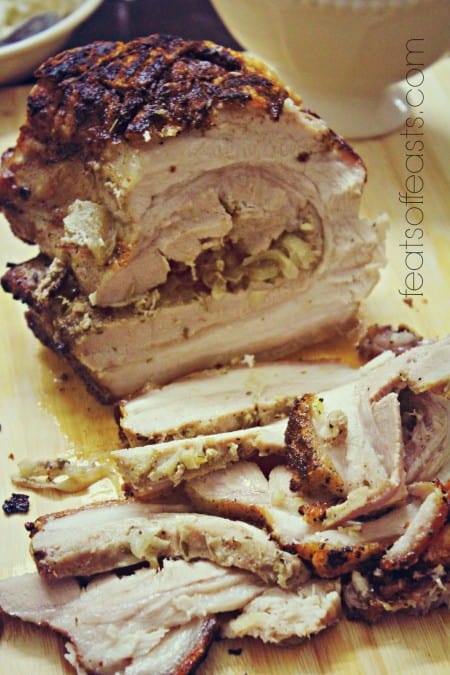 As for the dinner rolls, I have never been more please at the way they turned out. To lift the cloth up and see them proofing beautifully had me doing a happy dance. I must explain that prior to discovering the joys of instant yeast, I was experimenting with active dry yeast all the while and it had never, ever worked. The proofing was never double or triple the size. So that put me off baking for a long time. Nothing like a successful bake to motivate you again. 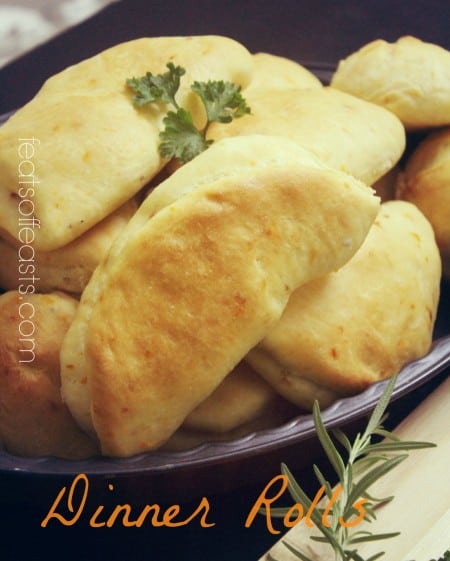 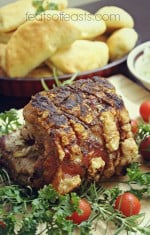 1. Separate the rosemary leaves, put together with the lemon peels and chop till you have a fine crumbly mixture.
2. In a pestle and mortar, pound the garlic to a paste.
3. Add in the fennel powder, the rosemary-lemon, salt, black pepper and oil.
4. Give it a good mix. Slice the onions and mix it into the marinade. Set aside.

1. If the pork has been in the freezer, take it out 2 days before you have to cook it.
2. Day 1; Defrost the pork and thaw it. Wipe away any excess moisture with paper towels. Keep the fridge overnight uncovered to have it really dry.
3. Day 2; Score the skin with a sharp knife. I bought a brand new box cutter for the job, it’s the best tool for scoring skin but make sure you clean the blade thoroughly. There are kitchen grade cutters out there but it’s not so accessible or cheap here. Rub marinade all over. Onions go inside the pork. Roll it up and secure with twine. Rub marinade on the outside skin. Cover whole thing with foil and tie up the ends. Keep overnight in the fridge.
4. Day 3; Take out the pork to come to room temp, say and hour and a half before cooking. Pre-heat oven to 180C. Sit the pork on a tray of onions, carrots and rosemary. Season outer skin with more salt and roast. 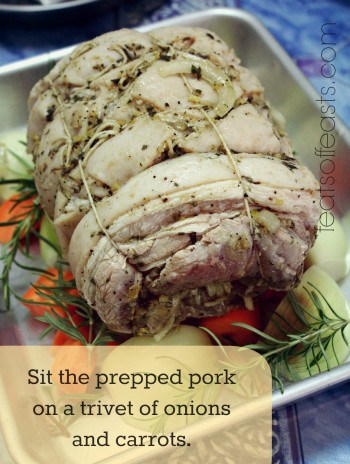 5. Use a thermometer to check the internal temperature of the pork. It’ll take about 3 hours to roast this amount of pork. 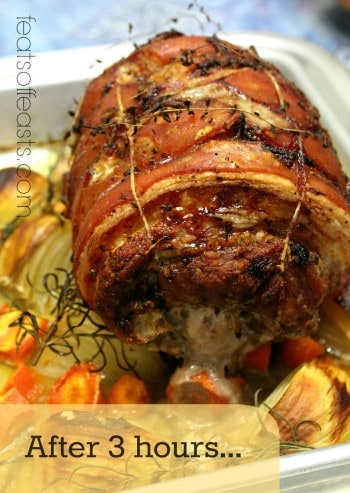 7. Take the pork out, remove the twines. Increase the oven temp to 250C. Char the skin till it’s crisp. KEEP A WATCHFUL EYE ON THIS PROCESS. IT’LL BURN VERY QUICKLY IF YOU TURN AWAY EVEN FOR A SECOND.
8. Rest the pork for 15 mins before cutting and eating. Eat with dinner rolls or as it is with the gravy.

1. To make gravy, remove most of the drippings from the tray till you have about two tablespoons left.
2. Add a tablespoon of flour and mix it into the bits left behind.
3. Add chicken stock. Use a masher to mash the vegetables to a pulp. Taste, season with salt and pepper.
4. I like to add a few dashes of Worcestershire sauce. Reduce the gravy till it’s thick. Taste and see if it needs anything else.
5. Strain into a gravy bowl. 1. Preheat the oven to 220C.Line a baking sheet with baking paper.
2. Place butter in a saucepan and let it melt in slow heat with the slithers of garlic. You don’t want to cook or burn the garlic, you just want to flavour the melted butter.
3. Place all the remaining ingredients into the bowl and mix with hands or with a mixer that has the dough hook.
4. Pour the 1/3 cup of the melted garlic butter and add the chopped ovendried tomatoes.
5. Continue to mix just until the dough comes together.
6. Remove dough from bowl and divide it to 12 pieces. Shape each piece into a flat oval, brush with the butter and flip over so they look like clams.
7. Leave to proof for 5 mins. 8. Before baking in the oven, brush tops with the melted butter again and bake for about 10 mins or till they’re slightly brown.
9. When you take them out still warm, brush again with the butter. Serve warm.