Ahhh, December….the month of gastronomic indulgence to celebrate the season’s cheer. December goes by very quickly because every other day or night is just another party or dinner at someone’s house or place. I recently had mine last weekend with a group of awesome people. There was a feast…of course they’ll be a feast, there’s always a feast…what’s a party without a feast…. 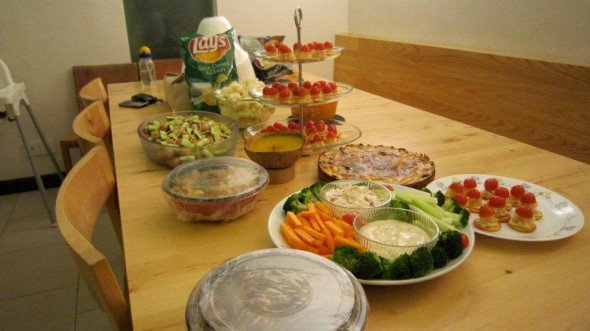 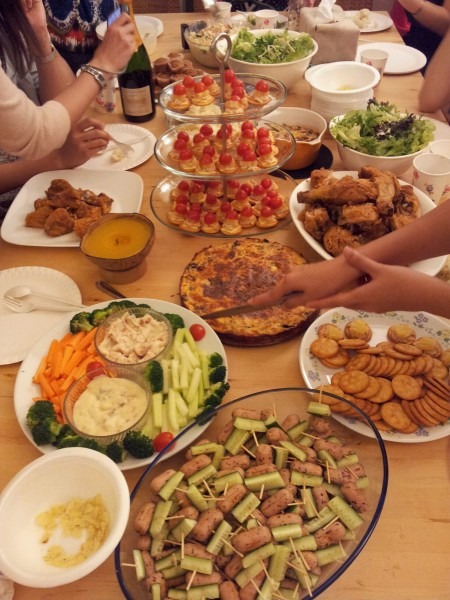 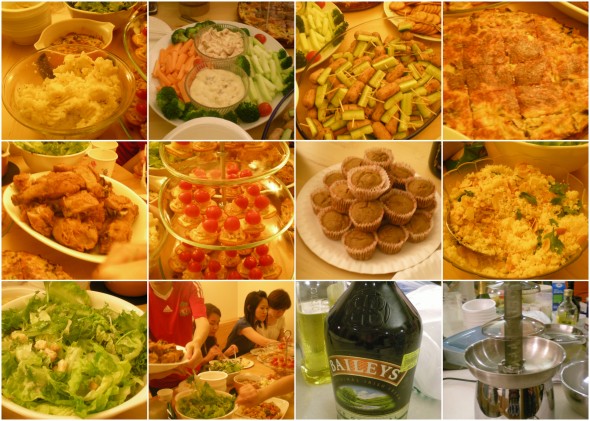 The night really stretched on because we had so much fun with the carols, gift exchange, games and laughing at other people. Those with small kids can attest to the feeling that you wish you could stay longer but by the certain hour, crankiness and boredom kicks in for all the little ones. My little man was no exception, he was doing his ‘squid manoeuvres’ on the floor and screeching at the top of his lungs to get attention. By the time this photo was taken, we had already been through a 5 minute friendly tussle. 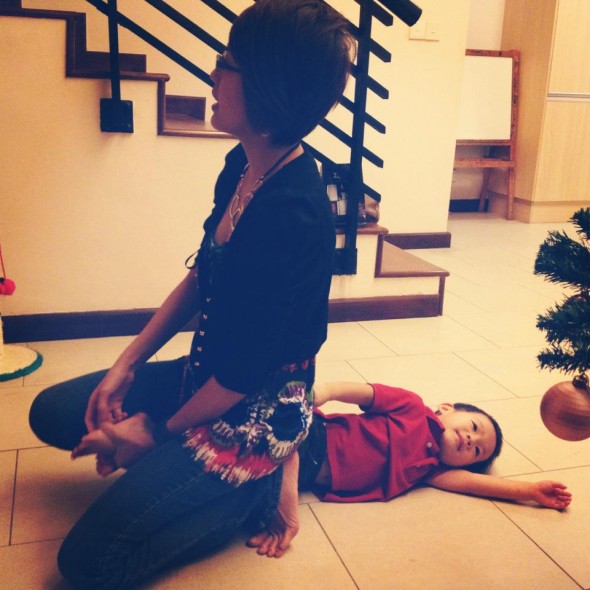 Now, I did say I was going to do a review and it all started the day I crave to bake some Christmas-y cake. The recipe calls for almond extract or essence so I went and got one. But something disastrous happened. It was a cream cheese pound cake and after adding the essence, my entire mix curdled like cheese (below). It was devastating not to mention exasperating and total crud of crap. I felt like absolute excrement for the rest of the night because I kept seething at the thought of wasting my eggs, cream cheese and butter. 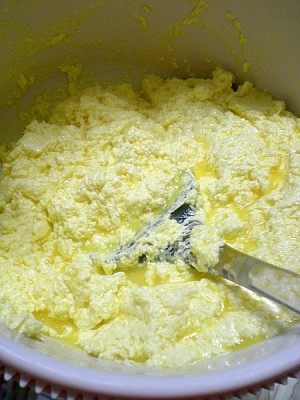 Only good for the trash now…..

Now you might think that I’m going to diss this culprit for all it’s worth but I think to be fair, I’ll review this more as an informative piece. Looking at the ingredients in the essence (below), it has glycerine, propylene, glycol, water and almond flavour. When I looked up information for the main 3 chemicals, I found that glycerine is what they use as an emulsifier in some products and also to make soap. Why is there glycerine in the essence? Beats the hell out of me….I suppose it has its function for some other baked dishes. But the label there says for cakes, custards and puddings…all dishes that are liable to split because of some form of dairy in it. So I think one shouldn’t say this product is bad but personally for me…in the future…if I were to make any baked dishes that has butter, cream cheese, milk or cream in it, I’d stay away using any products that has glycerine in it. The conclusion is…read the label, be informed and decide for yourself. I had my lesson the hard way and that’s why I’m writing it to you now.

I wanted to bake the wreath cake so badly, not because the recipe was damn fantastic but I fell in love with the picture of the cake before I even knew what was in it. The recipe was from To Food With Love. This is the first time I’ve ever been so taken by a photo, I want to make it no matter what. It is a lovely cake. So I tried again the second time with the recipe and photo stuck to where I can see it. The second try, I omitted the essence completely and it came out perfectly fine, so I wasn’t just being paranoid when I said the essence was the culprit. Cherries cost a bundle here. I was contemplating on whether or not to mix in some berries just to stretch the filling but I decided not to mess with ‘perfection‘ and stuck with just the cherries. 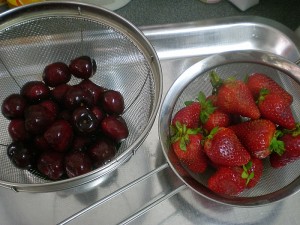 I saved a few back for the garnish but the rest went into the cake. I want the taste to matter more than the look and I want abundant cherries in the filling. I didn’t have a bundt cake mould (that would’ve been sooo awesome) so I used an ordinary sponge cake pan. I’m happy at how it turned out and the taste was everything I imagined it to be. Do I want to say it’s worth all that trouble I went through? No…I don’t ever want to waste food, PERIOD! But, in all spirit of Christmas, peace and goodwill, I’m gonna ‘have my cake and eat it too.’ 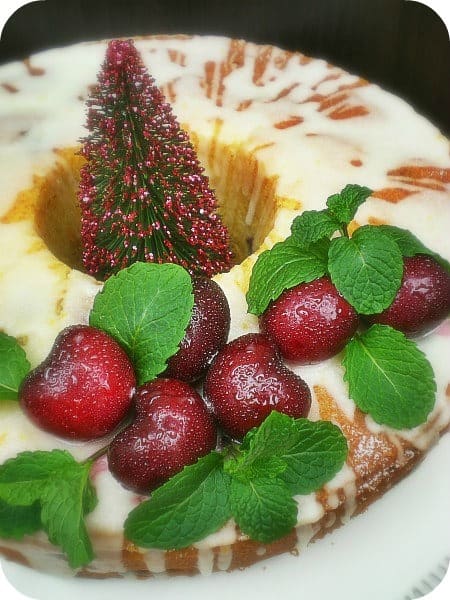 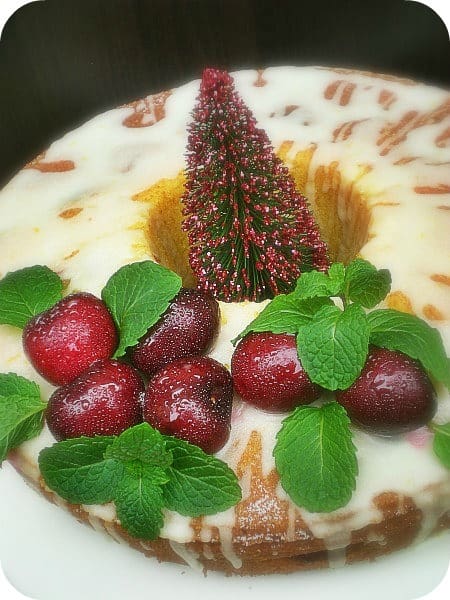 1. Preheat oven to 170 degrees Celsius. Grease and flour an bundt pan or a sponge cake pan.
2. Mix together the flour, baking powder, salt and cinnamon. Set aside.
3. In a large bowl, cream together the butter, cream cheese, and sugar until light and fluffy. Beat in the eggs one at a time, then stir in the vanilla (I omitted the almond essence for this cake).
4. Slowly, beat in the flour mixture, mixing just until incorporated.
5. Dredge the well-drained cherries in 1/4 cup flour, then gently fold into batter.
6. Spread into prepared pan and level the mixture with a spatula.
7. Bake in the preheated oven for 60-80 minutes, or until a toothpick inserted into the center of the cake comes out clean.
8. Let cool in pan for 10 minutes, then turn out onto a wire rack and cool completely.
9. Once the cake has cooled, combine the ingredients for the orange glaze icing in a bowl until you get a smooth mixture that is not too runny.
10. Drizzle the cake with the glaze and arrange fresh cherries on top. Add a sprig (or more) of mint leaves. Dust liberally with icing sugar.

Note; Looking back at my photographs, I realised one thing and here’s a tip, if you keep berries in the fridge, wait for them to come down completely to room temp so as not to suffer condensation, especially if you use them as garnishes. It’s not a big deal but just doesn’t look nice in photos. 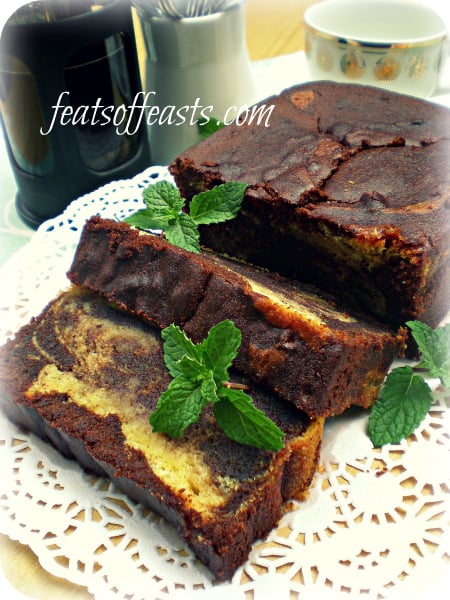