Recently, my husband and I took a family trip with his siblings to Sitiawan with the intention of visiting Pangkor Island. But it goes without saying that when we were there, there’s bound to be a food binge of all the good stuff in Sitiawan. Now while I call this post a food escapade, for some reason, they ended up ordering pretty much the same things. I asked my hubster about this and he says, this is what they look for when they come back home to eat. Well, I was surrounded by 3 pure-bred Sitiawan folks, so who am I to argue then. Going along with the ride, it was indeed a trip of indulgences and excessive eating!!

We stayed at this place by the sea called Best Western hotel, and my look at the breathtaking view outside; 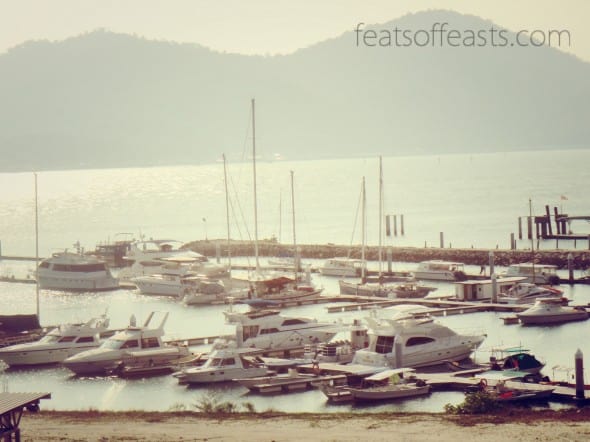 The first place we always stop to eat when we arrive in Sitiawan is Bei King Restaurant which has been around for many years but recently they started a hotel-restaurant business. 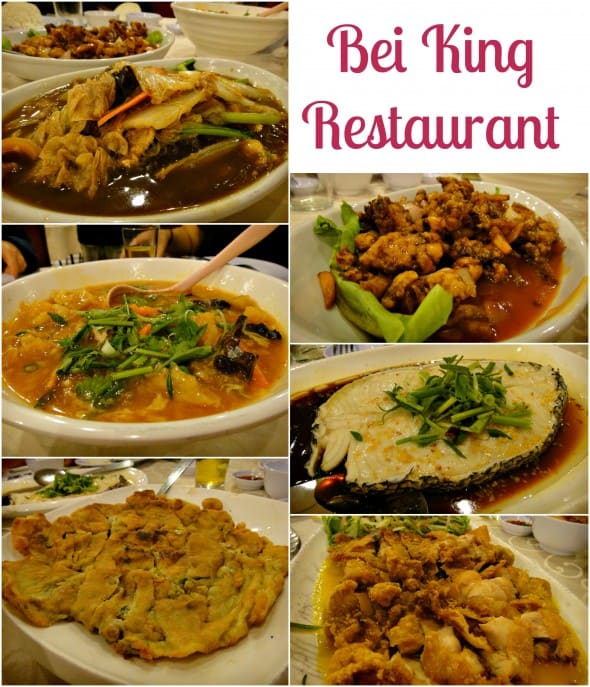 During dinner on the first day, we rode out to Ayer Tawar for another round of gorging; 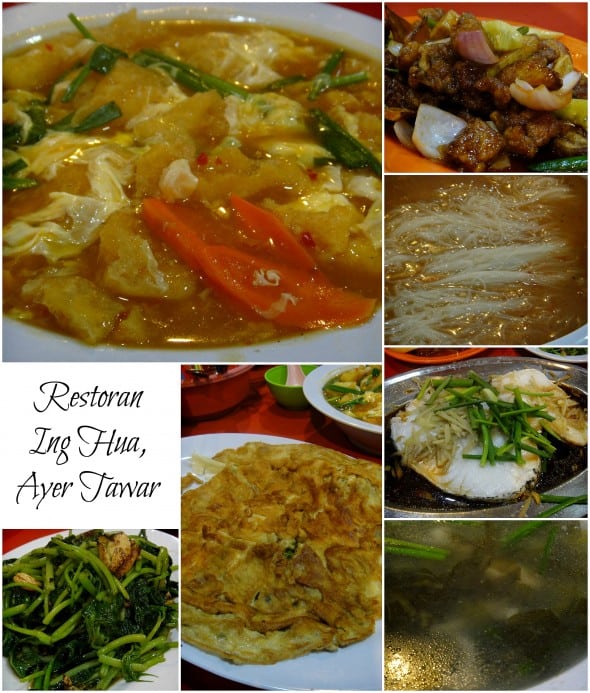 The next day we decided to try this really old school place for lunch. They still maintain that traditional wooden shed look and their kitchen is a basic make-do next to a room where the tables and chairs are set. 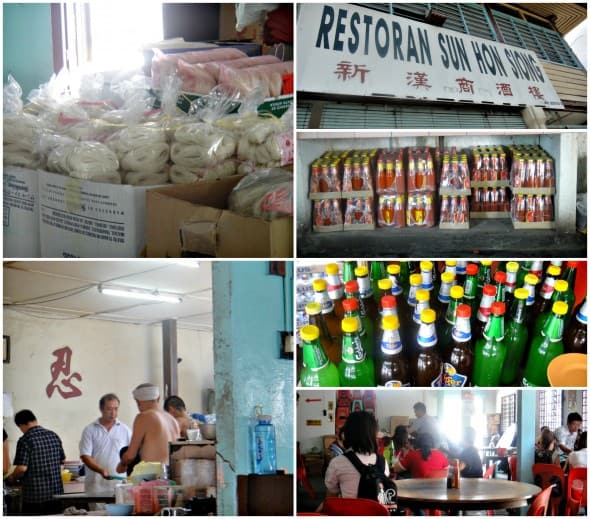 Selling hand-made mee suah noodles; bottles and bottles of Kampong Koh chilli sauce,
you see this on almost all the shops in Sitiawan;
those are not bottles of beer,
they’re actually homemade barley drink…. 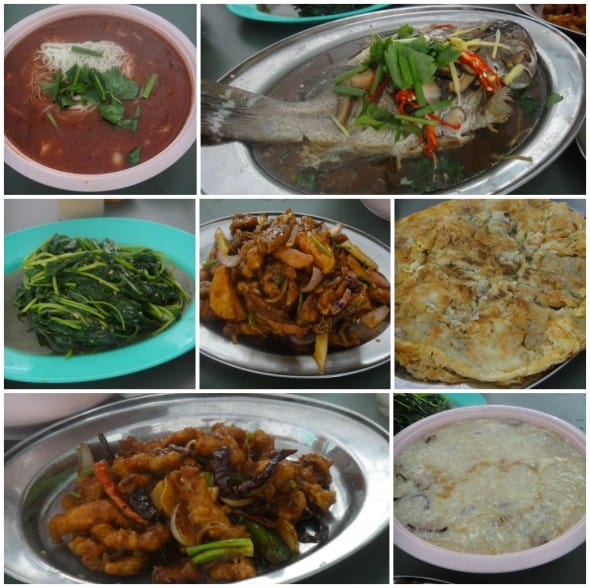 We took a short trip to Pangkor Island, just for the kids to experience the sand and the sea (below), while my son was to absorbed with the sand, my daughter was none too thrilled, she doesn’t like the waves crashing in nor the sand getting onto her butt, in the end, we just had to sit her on the float for her to be quiet. 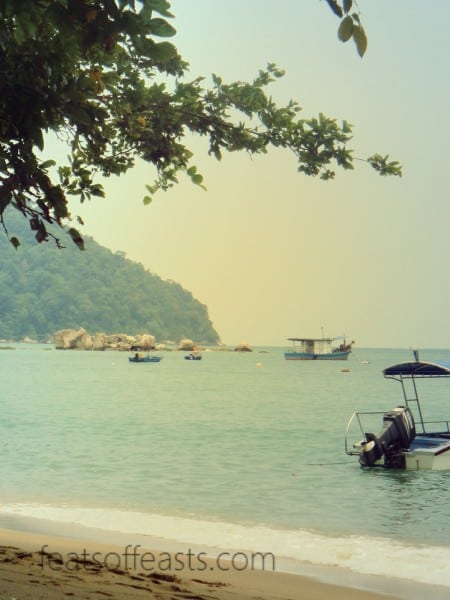 Of course for breakfast 3 days in a row, it has to be kampua or kampua lu at this place; 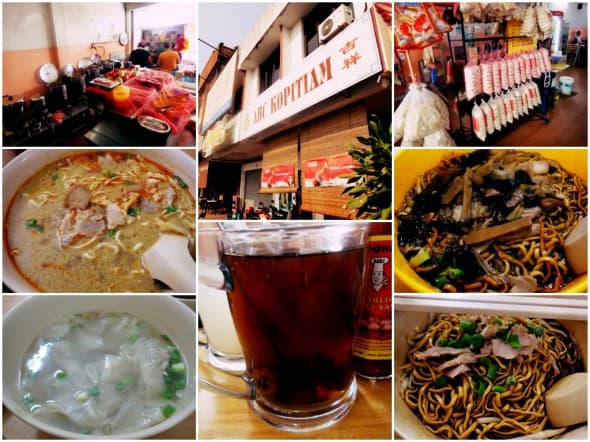 I’d thought I’d take a picture of the condiments (below) they have on the table because you will hardly find this in KL, century eggs on every table, they serve them like they’re hard-boiled eggs. Minced garlic in vinegar, sambal paste and shrimp paste for the kampua with laksa ‘lu’, that means you have a plate of kampua noodles with an asam laksa-ish soup on the side. 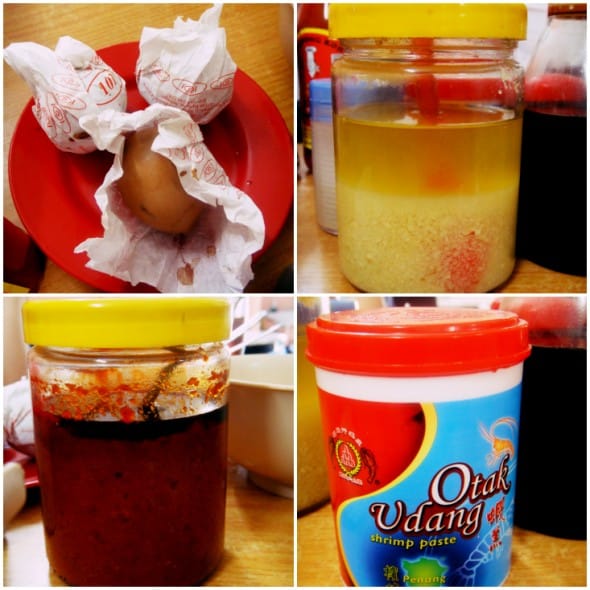 This place is where we usually go to get biscuits and tit-bits. Of course, there should be kong piang, the meat and onion type… Something interesting to show,
a tube of mooncake, 4 for RM7.50,
really cheap…it’s not bad actually… 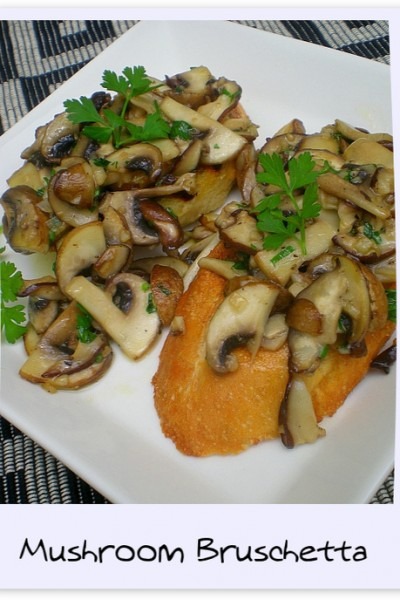